According to the Angry Birds Star Wars Character Encyclopedia, his official name is Jabba the Hogg. He is a greedy crime boss and steals anything to eat from anyone other than himself. He does not need to hide like most criminals as he has so much power he live like a king in a palace. He is surrounded by bodyguards and glaves. He has no skeleton, similar to a slug. He loves feeding his captives to the Sarlacc, or in this case Lardsack, the only thing that is hungrier than he is. Jabba operates behind Lard Vader and hides his actions so Vader cannot see. He likes hanging out with Greedork, as Greedork is extremely weird-looking, it makes Jabba look more handsome. His home planet is Nal Hutta and he can eat extremely fast. His allies are Boba Fett and Greedork. 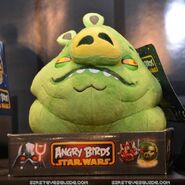 His appearance in a cutscene 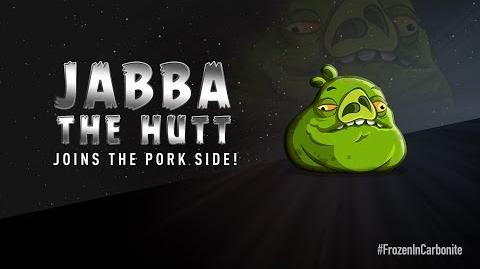