Jewel (chained to Blu) is the deuteragonist of Rio, and appears alongside Blu, trapped in the same cage that he is contained in, as she is the only other Spix's Macaw. Once she is freed, she becomes a usable Bird, but is only used in some levels in Beach Volley, the final level of Jungle Escape and a couple of Market Mayhem. She makes Bomb's pain noises. She was kidnapped by Nigel in the episode Smuggler's Den on the final level, then got free by the Angry Birds. She is chained to Blu, and when clicked or tapped, she flies straight forward. As shown in the Rio movie, she has 3 baby macaws. Jewel Also Makes a cameo appearance In Angry Birds Rio 2 when You Use The "Call The Flock" Power-up, where she may appear with the birds. 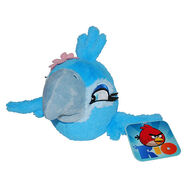 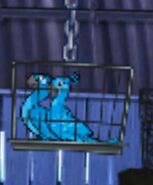 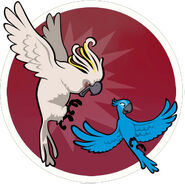