Judge Peckinpah is an owl who is standing on another bird to hide his true size and a former anti-hero of The Angry Birds Movie. He is voiced by Keegan-Michael Key.

He is a Great Grey Owl with purple feathers on his head, a medium-sized yellow beak, two eyes, a ruffled chest, two short purple wings and yellow feet.

When he stands on Cyrus, he looks tall  wears a large purple cloak.

Judge Peckinpah is an extremely arrogant, biased, pompous, and unjust judge who loves the sound of his own voice and holds court even when he's not actually in court. He typically sends birds to the anger management classes at the Infinity Acceptance Center.

He can be seen strutting around Bird Island like he owns the place. He is so small that underneath his robes, he stands on the shoulders of another bird, Cyrus, even though every bird knows the truth, meaning he's not fooling any of the citizens. He only believes he's the one with a higher calling one that requires a higher perch on Cyrus' shoulders. He was at first the antagonist but after the raid on the village's eggs, he reformed and helped Red get the eggs back.

He initially did not like Red due to his anger issues and sentenced him to the Infinity Acceptance Center as a result of the Happy Hatchday Scandal, and when he found out that the pigs stole their eggs and burned down their village, he felt remorse for not listening to Red, and fought under his command during the Battle of Pig City. In return, he and the rest of the citizens of Bird Island rebuilt his house and moved it back into the village.

village but Red had proof. He had a fully 3D Model and was unplayable, but in the game he appears competing with the player in the levels, but only as an icon.

Judge Peckinpah would appear in the game as again an important but unplayable character, he helped Red in rebuilding

the village. He gives tasks to the player do and is nicknamed as chief. He uses a Classic Toons design while he uses a coat but without Cyrus. 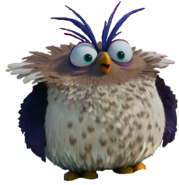 The Judge without Cyrus' support 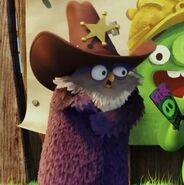 The Judge wearing a sheriff's hat 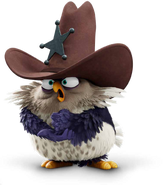 The Judge wearing a sheriff's hat without standing on Cyrus

Model for Angry Birds Action!, along with Cyrus.