Jurassic Pork is the fourteenth and final episode of the original Angry Birds.

The episode starts with the birds going to the Mesozoic Era in the Time Machine that Foreman Pig created and teleported to here from Piggy Farm. He also became the king of some prehistoric pigs.

After a lot of effort, the birds retrieve the eggs back by defeating the pigs and make a party by setting the time machine into party mode. Meanwhile, some pigs ride Tyrannosaurs.

The episode features several new prehistoric features, such as a Mammoth costume, palm trees, dinosaur fossils, dinosaur masks, etc. One of them is the Pterosaur wing, which makes objects and pigs flip.

Dinosaurs and other prehistoric creatures appear in the levels fro 35–15 to 36–14, and Fossils appear from 36–15 to 37–16, which most of them in the third part are living beings that were revived by thunders.

The levels in this episode go to easy to hard, but most of them have a medium difficulty.

There are no Golden Eggs in this episode.

It is set on the Mesozoic Era of Piggy Island. There is a jungle full of trees that lead to large mountains and volcanos with some trees, and Pterosaurs fly in the sky.

It is now set on a bone desert on a stormy night, there are some Mountains and on the foreground, there are bones, and strikes of lightning often occur. 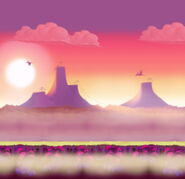 The Shell you get after completing the episode

The Shell you get after 3-staring the episode