The Kentucky Free Chicken Tournament is a tournament of Angry Birds Friends!  that happened on:

It's a special tournament that features several things. The main special thing is the chickens that appear in the levels and need to be freed and there's also special farm-themed music theme.

It is time to enjoy some farm life!  Have you already released all the chickens from level 4?

This week we get to enjoy freeing the Kentucky chickens from the evil bunny-pigs (bunnigs?)

In the background, there's a crop with hay farmland and hay rolls. There are also a bit of trees near it.

In the foreground, there is a dirt path near a fence that guards a lettuce crop.

It features several things such as: 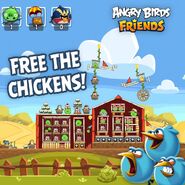 Add a photo to this gallery
Retrieved from "https://angrybirds.fandom.com/wiki/Kentucky_Free_Chicken_Tournament?oldid=253369"
Community content is available under CC-BY-SA unless otherwise noted.