For the location, see Pig Palace.

King Pig's Castle (Epic) is the fourth level of Pig City in Angry Birds Epic. It is a Castle stage. When this level is finished, the player may spin for 1 Treasure. (3 Paper if replaying) The Apprentice is introduced here. They are magic pigs who acts almost identical to Stick Pigs. However, instead of stumbling for their second attack option, they can cast a weak protective shield and reduce the damage taken by 10% on any pigs, even themselves.

King Pig is also fought here during the final wave. His attacks, however, are quite pathetic: Burp which deals very little damage and prevents the usage of the target's rage ability for 2 turns, which is the most harm he can do to the birds, and Weeping Cry, which just wastes 2 of his turns. His passive ability, Annoying, boosts all allies' attack power by 20%, which can make both Wizpig and Prince Porky hit slightly harder, which is the more dangerous part.

Wizpig has a new attack option for this battle: Weaken. He will charge for 2 turns before unleashing it on all birds. It deals no damage but in exchange, all birds deal 75% less damage for 2 turns.

Hint: Observe your enemies abilities and watch out for weaknesses. Good luck!

Before retrieving the fifth egg

King Pig is surprised when he sees the birds. So he calls Prince Porky to come here and defeat the birds. But of course the birds can defeat the two of them. So Prince Porky calls the evil Wizpig to come out. Wizpig comes out and shouts to the other pigs to frighten them. King Pig and Prince Porky was frightened while Wizpig laughs evilly again. He then goes to his position and the battle starts.

After retrieving the fifth egg

King Pig and Prince Porky has been defeated and the birds got the fifth egg. But Wizpig uses his magic wand to get the egg and the King's crown and then makes his evil laugh in front of all of the others as he want to be the King. He opens a portal that takes him outside the castle. While King Pig just stands there and cries, Prince Porky and Red are angry and yell at him to give back the crown and egg. As Wizpig comes out, he laughs evilly and the others are scared because he stole the egg and the crown. But he doesn't care and flies away. He flies to the top of Hog Head Mountain and laughs again. Then, he makes his own castle at the center along with five floating rocks around it. He puts the egg on the top of the castle while he keeps the crown on his magic cloud. King Pig continues to cry while all of the others are really angry with Wizpig. Then, he continues to make his own army on the floating stones. He puts five different mage pigs to each of the floating stones. Then, he shouts to the five pigs to combine their powers and make a magic shield for his castle. Finally, he makes his last laugh to the birds and the other pigs. First, you must go to the top of the mountain and defeat all of the five mage-pigs to make the shield break.

The player has to engage 1 Corporal and 4 Soldier Pigs.

The player has to engage 1 Guard Captain and 2 Pig Guards.

The player has to engage 1 Pyropig and 4 Apprentices.

The player has to engage 1 Royal Guard and 3 Soilder Pigs.

Three of these are summoned once every three turns:

Choose Red in Paladin, Matilda in Druid and Bomb in Capt'n. In all waves, heal with Matilda when the birds' healths are not full, otherwise, attack with her. Then attack with the others. The order of the attacking targets are:
Wave 1: Soldier Pigs then the Corporal when all the Soldier Pigs have been defeated.
Wave 2: Pig Guards and then the Guard Captain.
Wave 3: Apprentices first, then the Pyropig.
Wave 4: Defeat the Soldier Pigs and then the Royal Guard.
Wave 5: Wiz Pig first, then King Pig, and finally, Prince Porky (If the three Aid Bombs are on the battlefield and the Rage Chili is not filled yet, attack all three of them before it explodes, or else your enemy will get 30% more health!)

Choose Red as Samurai, Chuck as Rainbird, and Bomb as Capt'n/The Blues as tricksters. You need a few veggie cakes and potions. Heal by Chuck's Healing rain or use the potions. The order of attacks are:

Wave 5
Add a photo to this gallery 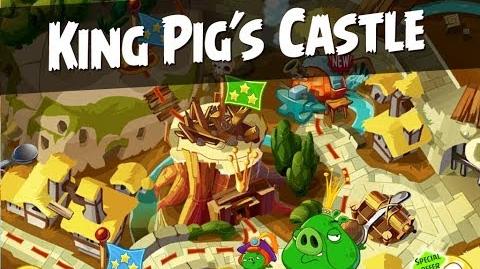 Retrieved from "https://angrybirds.fandom.com/wiki/King_Pig%27s_Castle_(Epic)?oldid=266128"
Community content is available under CC-BY-SA unless otherwise noted.