Start a Wiki
This unidentified female pig, also known as and more well-known as King Pig's mother, was the Queen of Piggy 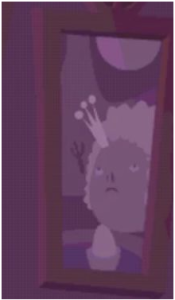 Island and was the consort of the King of Piggy Island, who was King Mudbeard, also known as Leonard.

She gave birth to a child, Smoothcheeks, who later became King Pig.

She married King Leonard Mudbeard some time after the Battle of Pig City and on September 19 gave birth to a son, Prince Smoothcheeks. This child, after the death of King Mudbeard - eventually became the King of Piggy Island, and better known as King Pig.

She died at an unknown point in the timeline of the Angry Birds series and was mourned and given a funeral. She was possibly buried in a cemetery or a crypt in the Pig Church. Her portrait remains in the throne room of the Pig Palace, where it can be seen while playing Dessert Mode in Bad Piggies.

Retrieved from "https://angrybirds.fandom.com/wiki/King_Pig%27s_mother?oldid=236551"
Community content is available under CC-BY-SA unless otherwise noted.