This article is about his Christmas Version, for his normal version, see Kowalski .

Kowalski the Elf is a character from Angry Birds Evolution that couldbe obtained at the Hatchery during the first Christmas Event and then in other Christmas Events.

In the softlaunch, he would hatch from a Christmas Egg during the Christmas Event, just like the other Christmas Birds, including Red .

Kowalski has been hit by the Christmas spirit!

It is an ordinary Kowalski , but with a red bib with green curls.

His gaze becomes angrier on his face, yellow star freckles and a garland with flashlights appear.

Its bib becomes dark green and with dark green pine tree sumbols, red Christmas ornaments for the Christmas tree and mistletoe appear on it. Shiny black sunglasses appear on the eyes.

His bib changed. Now in the middle and top it is green and with a curl at the top, and red at the edges, and the edges became zigzag and received bells. A red and white curved candy cane hangs on a neck on a rope.

Cause an explosion, dealing 200 damage to all enemies in rauge and leaving behind a circular zone for 2 turn(s). Eath enemy in the zon drops a gift when hit containing a Power Up.

Cause an explosion, dealing 830 damage to all enemies damage in rauge and leaving behind a circular zone for 2 turn(s). Eath enemy in the zon drops a gift when hit containing a Power Up.

Cause an explosion, dealing 1300 damage to all enemies within reach and tagging them for a guaranteed critcal next turn

Cause an explosion, dealing 1300 damage to all enemies within reach. All enemies hit explode at the end of the turn, dealing additional damage in a small radius.

Damage against huge pigs increased by 25%.

As his rarity is good, he is very strong. Evolving him with the right evolution and (Or) then awakened will make him stronger. Totems and Runes can also help. 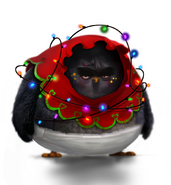 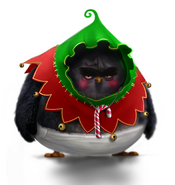 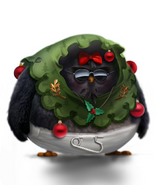 Baubles Blast Icon.
Add a photo to this gallery

Retrieved from "https://angrybirds.fandom.com/wiki/Kowalski_the_Elf?oldid=256451"
Community content is available under CC-BY-SA unless otherwise noted.