Kumiko is a bird in Angry Birds Evolution that can be obtained at any time in the hatchery. She is a Yellow Birds that belongs to a group of Small Birds.

Kumiko and her best friend Charlotte are two very cute peas in a pod but as the old saying goes: street angel house devil Charlotte’s parents are still settling a civil suit with the chick sitter for the loss of her feathers while Kumiko’s parents haven’t been able to find great grandmother in months! Best friend: Charlotte

Her eyes become angrier, two small brown spots appear under her eyes. A huge lush raspberry bow with a gold round buckle appears on the chest. Hair grows longer on the head, and a diadem with a red gem is worn underneath. Long braids appear behind. On the enlarged "cones" appear red gems with a silver frame.

Dash through enemies, dealing 46 damage and tagging them for guarnteed ciritical his next turn.

Dash through enemies, dealing 60 damage and tagging them for guarnteed ciritical his next turn.

As her rarity is a bit low, her strength is not so good, but she can be evolved or (and) then awakened to become stronger, Totems and Runes can also help 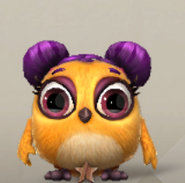 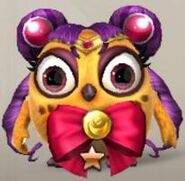 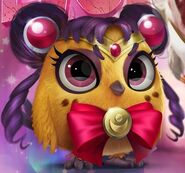 Evolution Ads
Add a photo to this gallery
Retrieved from "https://angrybirds.fandom.com/wiki/Kumiko?oldid=247379"
Community content is available under CC-BY-SA unless otherwise noted.