Male
Lando Calrissian (also known as Lando Bird) (born 43 BBY on Socorro) is a bird who first appeared in the Cloud City update of Angry Birds Star Wars. He became a playable character in version 1.3.0, which also introduced the powerups from the Facebook Version of Angry Birds Star Wars to the mobile version. During the Death Star 2 chapter, Lando's blaster is upgraded into blue lasers, which are slightly more powerful than the red lasers.

According to the Angry Birds Star Wars Character Encyclopedia, his official name is Lando Birdissian. He has charm and uses it to make himself rich. He is a suave smuggler, just like Han, and one of the greatest gamblers in the galaxy. Although he is charming, he has a heart of gold. He betrays the Rebels but then betrays the Pork Side again. He gambled and won Cloud City. His clothing is made from the finest materials bought by money and neatly grooms his facial hair. He is a Baron Administrator of Cloud City and is responsible for keeping it safe. He is responsible for turning Chuck "Ham" Solo to carbonite. His home planet is unknown and has the ability to smooth talk. His ally is Chuck "Ham" Solo.

He then reappears in Angry Birds Star Wars II with the exactly same ability, however, some of the sprites were modified, for example, when he is launched, instead of making a cool face, he simply opens his mouth. He can be obtained at the carbonite along with Ham Solo and other Angry Birds Star Wars birds. 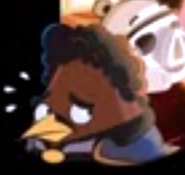 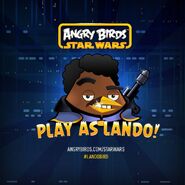 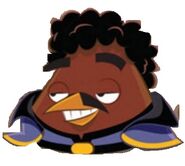 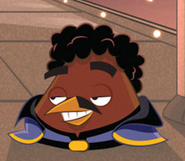