Leland is an Angry Birds Evolution Bird that can be obtained at any time in the hatchery.

Leland's favorite anger attack is the blue bird roll... and he has enough weight to really pull it off!

Based on Sonic the Hedgehog, he is a teal fat egg-shaped bird,(made in the style of The Angry Birds Movie), on his belly the teal color is lighter. On his face the teal is darker, he has a long flat yellow beak and tiny feet of the same color, dark teal eyebrows and he haves also a long dark teal feather hair. His feathers are very visible and he has a large dark teal tail on the rear.

Leland's hair is bigger, there is now a moustache on his beak, dark lines are around his face, one of them formed like a tuxedo and a feather bow tie is now present. 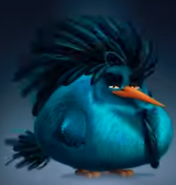