Li'l Pecker is an Angry Birds Evolution bird that can be obtained during events such as the Flockaballoza, his debuting event.

Lil Pecker grew up on streets (of a wealthy suburb) where he had to fight every day (against having to take oboe lessons) and his hard-knock life can be heard through in his music. Sometimes credited as the inventor of  “blabbercore“ rap, Li'l Pecker is also the nephew of Major Pecker, a famous daily challenger.

Li'l Pecker is a medium-sized sack-shaped blue bird with short thick wings. The shape of the beak resembles a curved triangle, gritted teeth are visible on the left side. Thick long fingers are clearly visible on the wings. The eyes are large and white, with small pupils. There is also a black stroke around the eyeballs. He has long black hair braided in a pigtail.

He now wears a two-tone (pink and yellow colors) rumpled hat with a yellow capital letter “P” painted on it and blue pants with a purple elastic band and an iron pad with diamond (located in the center of the elastic band). A necklace in the form of a gray bead with a pendant in the form of a snout is dressed on the neck.

He also a wears purple jacket with a Golden Hal symbol on the back of it and a white tank top. He now has a goatee and more hair.

Based on a Eazy-E, he now has a dark blue mustache with a beard, thick eyebrows, and longer hair. He wears a black hat with a blue line, a dark gray jacket with light gray collar and sleeves, some golden sunglasses with black lenses, a dark purple shirt, golden parts, on his hair and an ammo belt, meaning that he uses guns.

There is also a tattoo that says PIG on his three middle fingers of his left wing.

There is now a tattoo on his right wing that is a Pig with the name Li'l Pecker.

Li'l Pecker splits into a mirror image when hitting the first 4 pigs or obstacles in his way, dealing 1170 damage with a chance to pickpocket pigs for gold and stun them for 2 turns.

Li'l Pecker splits into a mirror image on the first 3 collisions with a pig or an obstacle in his way, dealing 1300 damage and increasing the combo counter by 2 per hit. All pigs hit get stunned 2 turns (in PvP one turn less).

Boosts attack of all small body type birds by +30%

Increases the combo counter by ×2! 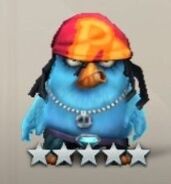 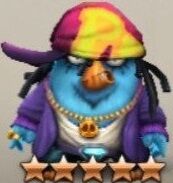 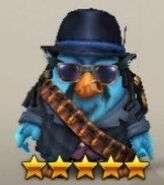 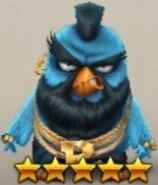 On the treadmill during evolution

Hatched in the Hatchery. 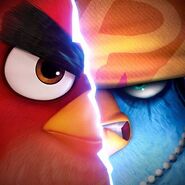 On the game icon