The player has to engage 2 Farmers.

Warning #1: In this battle, do not use Chuck to attack. Use his secondary skill to Bomb in every turn.

Warning #3: Be extremely careful than the second warning! The Smutje may activate "Emergency Provisions" on himself or the Big Pirate, which can allow any pig to be healed for 57 health for three turns! Remember that the strategy as in the second Warning, use The Blues as Tricksters so you can dispel either the Smutje or the Big Pirate who is using "Emergency Provisions", so you can keep them from healing 57 health.

Pirate Veteran, Big Pirate, and Smutje are the ones you have to take down as quick and careful as possible! Smutje can heal himself or another pig, so take him down. 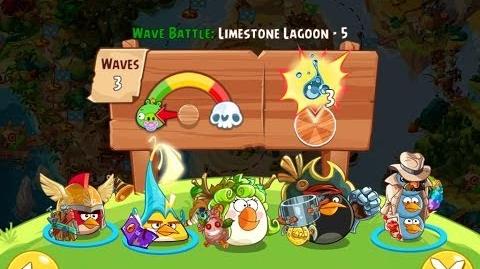 Retrieved from "https://angrybirds.fandom.com/wiki/Limestone_Lagoon_-_5?oldid=249629"
Community content is available under CC-BY-SA unless otherwise noted.