Red is Luke Skybird in the Star Wars game. He first appears with no ability as his normal counterpart , but after Tatooine 3-8, he gains a blue lightsaber that swipes and slices structures in an arc-shape, only doing it once.When beating the thirty-fifth level of Path of the Jedi, Luke will recieve an upgrade that makes him gain a green lightsaber, and black clothing that resembles Luke from Return of the Jedi. He seems to be more powerful than Red Bird was in Angry Birds. Name comes from the Angry Birds Online Shop.

According to the official Angry Birds Star Wars Character Encyclopedia, Red Skybird is a true member of the Bird Rebels and a True Hero. He is feisty and trains to become a Jedi Bird to help save the galaxy from the Pork Side. Red is clumsy and often drops his lightsaber and bumps into other birds. He is proud of his "blond feathers" as described in the book and Yoda is his teacher, even though Obi-Wan was his teacher as well. He is a fast learner and draws his lightsaber very quickly. He bought R2-EGG2 and C-3PYOLK from the Jawa Birds. Skybird is a brave pilot and is experienced in flight, however, he does not land his X-Wing very well. 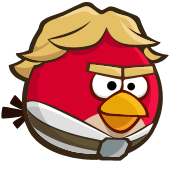 Red is first unlocked at level 1-1 of Tatooine, he starts with basically no ability, using only his strength to topple down the structures, just like his normal version. After beating level 1-8, Luke Skywalker will receivve a lightsaber and then appears in the level 1-9, with a lightsaber, after a cutscene that shows him setting the hut on fire.

He can use the lightsaber to slice blocks and defeat enemies, to do this, the player has to tap the screen on time and Red will use the lightsaber in an arc-way, doing it only once and taking a certain part of blocks, he can do this also a bit after falling into solid things, which often deals more damage. He can break wooden and glass easily, but not metal.

After beating all the levels of Path of The Jedi, the lightsaber will turn into a Jedi lightsaber, given by Yoda Bird in a cutscene. The Jedi Lightsaber is stronger and can slice things easily. Other than this, Red will become angry and his clothes will be black.

Red reappears as Luke Skywalker with three versions but can't be unlocked at levels, instead, he is unlocked by Credit purchases and also on the 8-hour carbonite. He appears in his Jedi form as normal version and is stronger, making the arc movement thrice. This version can be bought with:

He has the Endor Version that is a bit weaker, only doing the arc movement twice, one to the front, another to the back. He

uses a helmet that doesn't affect gameplay, this version never appeared in the first game. This version can be brought with: His last version is the Pilot version, that only makes the arc movement once, he wears the Rebel Pilot helmet that appeared

in the Path of the Jedi cutscene of the previous game. He has the same price as Endor Luke Skywalker.

This game takes plce before the first game, so Luke Skywalker wasn't born yet, but his father, Anakin Skywalker takes the main role as Red this time.

Luke's actor was Mark Hamill, who also voiced Evil Guy in Adventure Time. Hamil also portrayed the James Jesse version of The Trickster in both television adaptions of The Flash and Justice League: Unlimited. Perhaps most of all, Hamill is also best known for voicing The Joker in numerous DC properties. 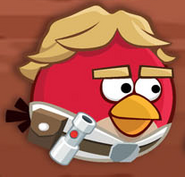 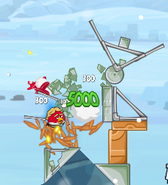 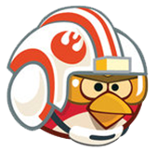 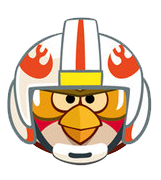 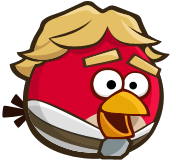 Pilot
Add a photo to this gallery

Retrieved from "https://angrybirds.fandom.com/wiki/Luke_Skywalker?oldid=247156"
Community content is available under CC-BY-SA unless otherwise noted.