Start a Wiki
The Magic Cauldron is an object obtained in Angry Birds Epic after completing Cobalt Plateaus - 7. It is used to brew potions using ingredients.

An upgraded version, the Golden Cauldron, and Diamond Cauldron can be purchased at the shop to increase the amount of potions obtained per recipe.

When the player obtains a new recipe for a potion, he or she can use the cauldron to brew it. The player will not receive the potion if there is insufficient ingredients required in the inventory. Once brewed, a die with 1 to 3 stars on each side is rolled if the player gets additional potions. (Example: 0 stars rolled for Banana Juice will give the player a single potion, while more stars will give multiple potions from the stars rolled above). 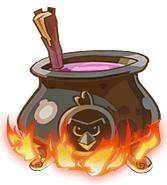 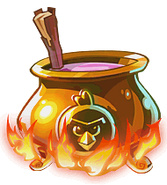 Golden Cauldron, gets you at least 1 star (in later versions, 2 stars) when brewing potions. 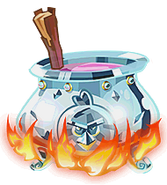 There are three main types of potions: juices that heal a bird, veggie cakes that fill the rage chili, and fruit cakes that heal all birds. Each has a sequential recipe ranking where a higher recipe replaces any lower recipes. Any unused potions are automatically upgraded to the new recipe when it is purchased. Be careful to check the new crafting cost before upgrading to a new recipe item.

Retrieved from "https://angrybirds.fandom.com/wiki/Magic_Cauldron?oldid=249347"
Community content is available under CC-BY-SA unless otherwise noted.