None, but appears in cutscene of Tusk 'til Dawn.

Male
Major Lazer is a pig that appeared in the cutscene for Tusk 'til Dawn and posters by Rovio Entertainment.

Major Lazer is a medium-sized pig, with light green color and trendy blue glasses, red beret, 2 bandanas which are attached to his ears, and 2 purple belts with microphones. In real life, the name Major Lazer is a musical project by DJ and producer Diplo, who wrote Shuffle and Spawn.

It is unclear why this pig appeared in the comics, so he probably manages zombie pigs and feeds them candy. Although, there is a poster where he stands on a pile of battered zombie pigs. This can show that Major Lazer destroys zombies.

Major Lazer is also against the original pigs. It was noted when he stunned Ross by bouncing off his pumpkin basket. 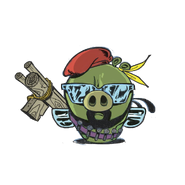 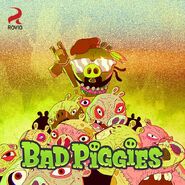 In DJ the CD Shuffle and Spawn. 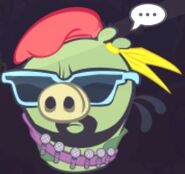