Male
Major Pecker is a bird and super trainer in Angry Birds Evolution, that was formerly unplayable but was later added as an obtainable bird in events, along with his Master form.

This trigger-happy veteran fimly beliefs in the nearest apocalypse and equipped himself with a pig-proof bunker in the desert. Although ready to shoot at everything that is green and moving, he only uses plumber's friends as ammunition. After all, no one wants blood in the front yard!

He is a fat yellow bird with large wings, yellow small hexagon-shaped orange beak, small feet of the same colour, large eyes with small pupils that have green irises, small feather hair with black long feather hair, black long feather tail and a peach belly. He wears a dark green military camouflage tanktop with brown and darker green spots, a camouflage headband,a patched bag full of plungers with red suction cups that is worn with a dark brown belt with a silver buckle and a necklace with silver pendants. There's dark green facepaint between his eyes, red facepaint on his cheeks, a bandage on his right arm, white bands on the same arm but next to the hand. He often carries a wooden bow with a plunder that has toilet paper.

He is the same except that the plungers are black birds that look like Bomb with yellow beaks iwth larger jaws, blue irises and long yellow legs. The necklce had also two green buttons.

With an extra portion of momentum, pierce through pigs, to deal 6585 damage and ignore all props on the way. Cooldown: 2

Buffs event birds by an additional 20% base health and 20% base damage.

Buffs the damage of teamates left and right from the bird by 20%.

Major Pecker was one of the Eagle Force members that protected Bird Island along with Mighty Eagle. He was the military genius of the crew who instincts saved the birds many times. There's a rumor that he lives in a old bunker now, exactly in the middle of the Yellow Desert.

Mighty Eagle then chooses the player to find him and he will stay in his cave to cover the player's back.

In the game, he represents the yellow birds and military evolution.

He also appears in his daily challenge, where he challenges players to win waves and get as many snouts as possible, this results in a prize. According to Li'l Pecker's biography, Major Pecker is his uncle. 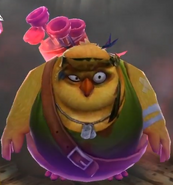 Normal.
Add a photo to this gallery

Artwork.
Add a photo to this gallery

Retrieved from "https://angrybirds.fandom.com/wiki/Major_Pecker?oldid=282435"
Community content is available under CC-BY-SA unless otherwise noted.