Chicken (Gallus Gallus Domesticus)
Margaret is an Angry Birds Evolution bird that can be obtained at any time in the hatchery.

Straight-laced, starchy, Margaret is a librarian whose feathers you definitely don't want to ruffle.

If you tweet too loud or mess up a book return, get ready to turn the page ON YOUR LIFE.

Secret vice: gluing the surface of the library tables and watching tweetagers fall asleep on them.

She wears a dark lilac t-shirt with a white circle with a classic angry Red symbol.

Based on Furiosa from Mad Max, she is now bald and the hair is replaced by car grease. She wears various beige limen bands that looks like a shirt with two brown belts with silver buckles, dark brown hard shoulder pad that is connected to a belt and she also wears black goggles with round transparent lens.

Based on Roz from Monsters Inc. and Margaret Gesner from Monster University, she was older and bottle-shaped, had a large head with a large chin, connected to a long neck, large wings, large fallen breasts, a beige belly, fat bottom, the beak was sharpier, the hair was the same but smaller and she was bored as her eyes were almost closed with pink eyelids.

She wore a beige wool jacket with white buttons and black glasses with with transparent lens.

Her eyes are now fully open and she is angry and now wears a short black shiny shirt with cleveage, black gloves and a black collar with a silver ring.

Throws a snowball, 373 damage to the hit enemy and additional damage to all surrounding ones

Throws a snowball, 481 damage to the hit enemy and additional damage to all surrounding ones

All red birds in team get +30% attack power.

When she is in her first level, it is less than 200, but she can be evolved to surpass this number.

When she is in her first level, it is less than 90, but she can be evolved to surpass this number.

When is in her first level, she gives less than 540 Bird Power to the team, but she can be evolved and trained to give more.

It costs 200 Red Evolution material to evolve her. The income of Red Evolution Material and Coins when selling her varies according to her level. 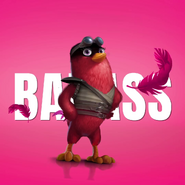