Marie Hamtoinette is the twenty-fifth episode in Angry Birds Seasons. It is second official episode of the Seasons 2016 package. It was released on March 31, 2016, for both iOS and Android. The episode takes place on the luxurious estate of King Ludpig XVI (never shown in-game), complete with hedges, topiaries, and ancient roman architecture across 18 levels throughout lush, beautiful landscape.

The cutscene shows when the player completes level 1–17.

It shows Bomb exploding and destroying the pigs' tea party along with a Leonard statue.

The Bird Fountain you get after completing the episode 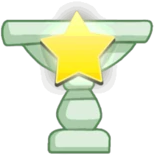 The Bird Fountain you get after 3-staring the episode
Español Русский
Community content is available under CC-BY-SA unless otherwise noted.
Advertisement