Max is an Angry Birds Evolution bird that can be obtained at the hatchery.

Max is the brattiest booger-filled bird in town.

He is a small round black bird with a gray belly full of feathers, medium wings, yellow large round beak with nostrils and jaw teeth, yellow feet, dark blue feather upside down bowl shaped hair with two feathers standing out of it, a dark blue feather tail, two large eyes with blue irises and a large black eyebrows that are together and large cheeks.

He now wears beige pants with a dark patch that is wore with a suspender that is pinned by black buttons, there's a slingshot in the pants.

There are two bandages in the form of a cross on his belly and he is now angry, which his beak is frowning and showing top teeth.

Faithful to his biography, he had a long green snout on his beak that came out of the right nostril, making him look silly.

A bump that is almost skin but has feathers appears on his head. His top teeth are broken.

Cause an explosion, dealing 146 damage to all enemies within reach and potentially increasing their turn counter by 1.

Cause an explosion, dealing 189 damage to all enemies within reach and potentially increasing their turn counter by 1. 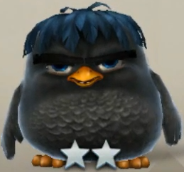 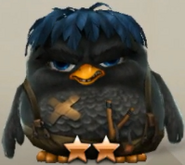 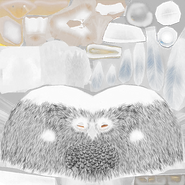 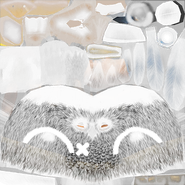