Angry Birds Wiki
Register
Don't have an account?
Sign In
Advertisement
in: Mighty Creatures, Year of the Dragon, Bombs,
and 3 more
English

For the eagle, see Mighty Eagle.

For the Space eagle, see the Space Eagle. For the eagle that appears in Froot Loops Bloopers, see Toucan Sam

Destroying everything then looping after being summoned by Red Koi Fish

''What is this canned junk? Bring me fresh food!''

It can be used for free on iOS, Android, and Symbian^3 devices and does not require the purchase of the Mighty Eagle. It is also available on AB Trilogy for PlayStation 3, Xbox 360 and Nintendo 3DS when you purchase the Anger Management pack.

He is a long orange dragon with a yellow belly and yellow fuzzy tail end. He has a proportional head with a long snout with large nostrils, a large eye with black bushy eyebrows, large mouth with various fangs and fur.

He has long white antlers and yellow spikes above him.

Like the Mighty Eagle, the Mighty Dragon is an optional character that can be used to destroy any fortress. However, it has a different style of attack than the Eagle. It first comes in from the upper left corner of the screen and goes after the koi. It then attacks by flying in a loop, pushing anything in its path, and creates a small earthquake, shaking the fortress to eliminate any missed Pigs. As a final attack, the dragon shoots into the sky to the upper right corner of the screen. A second earthquake may sometimes occur when this happens. He doesn't crash into the ground.

Its unique looping path calls for strategic placement of the koi but can be utilized in different angles of attack due to this. It can be bad as well, since when the dragon loops, it misses the material inside the loop. Once he does the loop he seems to lose power too.

Just like the Mighty Eagle, the Mighty Dragon can be used in two ways:

Depending on the elevation of where the koi lands, the Mighty Dragon may hit surprisingly higher than expected, passing slightly over the koi even, or hit lower, which produces more thorough destruction by making contact with more objects. All of this depends on if the Mighty Dragon is in the middle of diving or flying straight in its staircase-like descent as it reaches the koi.

Just like Mighty Eagle, he is calm and wise, not wanting to be disturbed. In the Year of the Dragon comic, it turns out that Mighty Dragon, mistakened for Mighty Eagle, seems to be a "picky eater".

A comic featuring the Mighty Dragon

How to use the Mighty Dragon 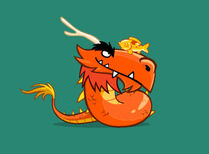 The Mighty Dragon with a Koi on him.

Close-up of Mighty Dragon during flight. 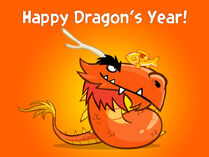 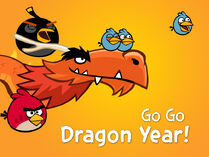 The Mighty Dragon in the Year of the Dragon logo. 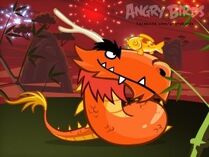 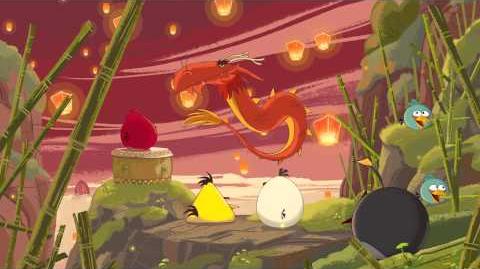 Thank you Angry Birds Year of the Dragon Lantern!
A video featuring the Mighty Dragon 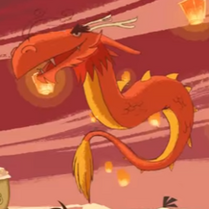 The Mighty Dragon on a Ming vase, from Catch of the Day 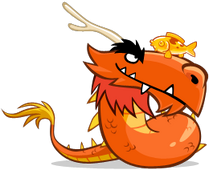 Pig holding a Ming vase of the dragon in Dogzilla