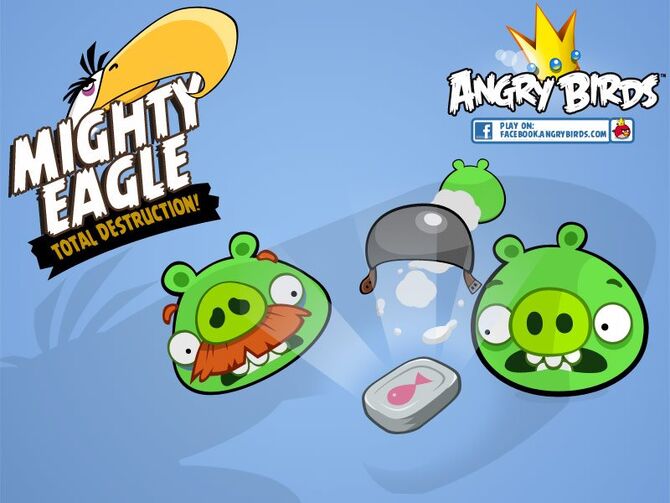 In his appearance in Angry Birds Fight, Angry Birds Epic and Angry Birds 2, Mighty Eagle's feathers are brown and his thick brows are now smaller and his eye bags are magenta. His beak has an orange mark (Just like Hal).

In the film design, Mighty Eagle appears as a giant white and dark brown anthropomorphic Northern Bald Eagle with a muscular and fat build - though currently he is mostly fat and out of shape, whereas in the past it is believed he was much more muscular and fit - and is identical to his game counterpart but with minor changes. He has a large dark brown feathered arms which he uses for flight and does not have the three black feathers on top of his head. He also has orange feet with black claws and has large black feathers on his back. His thick brows are now messier like his game counterpart, his large beak has maintained but the back of his beak was curled when he smiles arrogantly and his eye bags are now magenta like his Toons appearance. Mighty Eagle is also the only bird on Bird Island capable of actual flight, though his out of shape physique and lack of practice over the years initially made this task difficult.

"The Mighty Eagle is deep. He is a dedicated defender of the common good. Although he is happy working independently, he likes to have the support and positive feedback from others. When he sets out to do something, he gives it all he's got."

Mighty is a very wise and powerful bird who is greatly respected by the birds.

He loves his cave and sardines. He hates being disturbed. He is very grumpy, he hates everyone except for The Blues.[2] He is also happy when he gives candy to the Blues during Halloween.[3]

He is a very good friend of Santa Claus.[4]

Mighty was likely feared by the Angry Birds originally since Red was very afraid to go ask him for assistance in the Mighty Eagle trailer. As seen in a wallpaper, even Terence is afraid of Mighty. But as time progressed, especially in the comics, the Birds began to be less afraid of Mighty now. In fact, the Birds not only go to him to help them stop the pigs but in the comics, they go to Mighty for advice and listen to stories that have taken place a long time ago.

He has a dark secret he refuses to tell.

His description was updated into the movie version.

Mighty Eagle is a legend of mythical proportions in the bird community. The birds grew up with songs and tales about his amazing adventures and heroism. Because of his giant majestic wings, he is the only bird who has ever managed to fly.

In the film version, Mighty is different than his game counterpart who is wise to all the birds, he appears as somewhat of a celebrity jock who had many trophies and other things due to his heroism to protect the birds in Bird Island. He is initially lazy as seen in the movie before he shows his bravery to save the eggs. He also faints a lot after doing hard things, such as breaking into the castle.

At the end of the movie, he says to Red, Chuck, and Bomb that he made them lose faith in him to find faith in themselves, probably an excuse for his retire.

However, despite helping the Flock various times, he isn't and doesn't want to take part in it, which disappoints Red.

On December 17, 2011, the Mighty Eagle was made into a plush and could be bought for $100. It can be found online, mostly on the Angry Birds Store. It is the most expensive Angry Birds plush. This plush could also be won if someone collected 280 Easter Eggs and had a chance of winning it in the Angry Birds Friends Easter Hunt, along with some backpack plushes.

In LEGO Angry Birds, a LEGO minifigure of the Mighty Eagle was released in the 75826 King Pig's Castle set released in 2016. For more information, visit Mighty's page on Brickipedia.

Mighty Eagle's main ability is to come roaring down from the skies and strike the ground with incredible force, and every pig in his path will be popped immediately and every building block completely reduced to rubble. Any missed pigs will be instead killed by a massive earthquake the Eagle causes. Also, Mighty has a unique ability which is the can of sardines is placed in front of the pigs' structure, it will cause him to crash on the ground and spin out of control, which causes more damage.

As shown in The Angry Birds Movie, Mighty can break through everything in its path as well as taking flight with the use of his feathered arms as his wings. Some times, he can struggle to fly such as when he carried most of the eggs from his claws as he put them to safety, which was depicted in a statue.

By passing through an extraterrestrial wormhole of some kind, the Mighty Eagle can turn into the Space Eagle.[5] In this state, he somewhat resembles a raven or crow with its purple plumage. It also has two plume feathers on top of his head. The Space Eagle's beak appears to be strongly curved, but that's to be expected. Space Eagle appears much larger than Earth-going Mighty Eagle, but his power remains the same though it's a little weaker. This transformation only appeared in Angry Birds Space.

By being exposed to the radiation of an extraterrestrial device, the Mighty Eagle can turn into Alpha Trion. In this state, he gains a robotical look with a helmet. As an Autobird, he can change his form to turn into a jet or a person. He uses a Grimlock-esque weapon able to drag any block in a random direction and break almost anything with ease. Plus, in vehicle mode, he automatically causes earthquakes. This transformation only appeared in Angry Birds Transformers.