video Ham' o' ween and Surf and Turf levels. In the films, it is located at the center of Bird Island.

In the Angry Birds films, Mighty Eagle's cave has always been home to the namesake bird, filled with trophies, paintings, and other memorabilia of himself. It overlooks the Lake of Wisdom, which turns out to be his own toilet bowl. The cave is placed on a very high mountain on Bird Island, making access difficult and tedious such that it would take days to reach it from Bird Village.

A few days before the Raid on the Eggs, Red resolved to visit Mighty Eagle with Chuck and Bomb in hopes of convincing Mighty Eagle to intervene against the Pigs after being suspicious about why they were visiting the island,

without success. Mighty Eagle later decided to help them during the Battle of Pig City, turning the tide to grant the Birds victory over the Pigs.

After the Battle of Overseas Pranks ended soon after Zeta's first attack on the shores of Piggy Island, Leonard traveled to Bird Island in a submarine to convince Red to form an alliance to stop Zeta. Red introduces his friends to Leonard to create a strike team to disable the weapon, which then gathered at Mighty Eagle's cave to come up with a plan on how exactly to do it. The meeting was cut short when Zeta fired another ice ball right at the cave, seriously damaging it and prompting the team to evacuate through an emergency exit, but since it was only designed for Mighty Eagle, the others had to get a ride on him and then use a map of Eagle Island to parachute to safety after he crashed into a rock wall.

Just as the team gets to the ground, the cave crumbles and is destroyed, leaving Mighty Eagle devastated. The strike team then went forward with their attack on the superweapon on Eagle Island and after it ends in success, Leonard uses drones to sculpt the faces of the strike team onto the surrounding mountains of what remained of the cave to celebrate their victory. 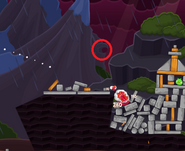 A Corporal Pig near the Mighty Eagle's cave, most likely during the events of Poached Eggs