Using a few of the Mighty Eagle's feathers

A power similar to Lazer Bird’s
Mighty Feathers Red is a transformation that appears in the Angry Birds series. It is an alternate state of Red, achieved by using a few of the Mighty Eagle's feathers. He is exclusive to the Red's Mighty Feathers episode and some levels of Flock Favorites and a golden egg but could also been bought as a power-up to support (RED) from November 2014 to December 2014 which was exclusive to iOS.

As Mighty Feathers Red, Red still looks the same but with red and white feathers surrounding him.

In Red's Mighty Feathers, and some of the levels of Flock Favorites and Golden Eggs, Red was transformed after being surroundered by some of the Mighty Eagle's feathers. When tapping anywhere onto the screen when this Red is launched, he will head towards said direction until he crashes onto something. Nonetheless, he is still as weak as in his normal state. This version of Red also appears as the only playable character in the Egg Defender minigame, in an unlimited number. Here, the player will have to use the least amount of Reds as possible to destroy the pigs' vehicles and prevent them from stealing the egg. Unlike in other episodes, the player cannot use power-ups on Red in this minigame due to them being disabled here.

This power-up is exclusive and was available for a limited time during the (RED) event, what it would of done was ether the first bird or no bird will be replaced with a Mighty Feathers Red. After the first Red was used, any Red that came afterwards while the slingshot was active would immediately gain Mighty Feathers. You could use this power-up for paying. It could only be bought on iOS.

The Slingshot when you activate the Power-up 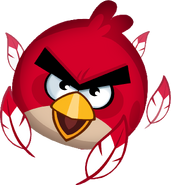