Mikhail is a bird in Angry Birds Evolution that can be obtained at any time in the hatchery.

What is a goon without a squad, a henchman without a.. uh, hench?

Poor Mikhail dreams of finding a strong-winged villain to give a villainous purpose to his existential anger.

Fun fact: Since 97% of his tattoos include a grammatical error, the local school invites him in for a game of "spot the error" every week.

Based on a Russian Mafia guy, he is a strong white bird with large wings, a built chest, a large gray beak with a tall top part, two large eyes with blue irises, gray eyebags, long yellow legs, blonde bushy forelock hair, also blonde eyebrows and a bushy tail with various feathers of the same color.

His beak is now broken and curved, he is angry and grimacing with perfect teeth, his hair is cut round and with some strands leaving, there's an injury above his left eyebrow, a bullet mark on his chest, and he wears a gray suspender with silver buckles that leads to dark blue jeans shorts with a golden button.

He had gray legs, a star tattoo on the arm, more tattoos on the belly, left of the chest and probably on his chin.

Roll out a spiky carpet, dealing 155 damage and rotating any hit enemy away from the team.

Roll out a spiky carpet, dealing 201 damage and rotating any hit enemy away from the team. 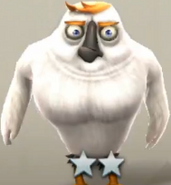 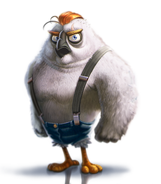