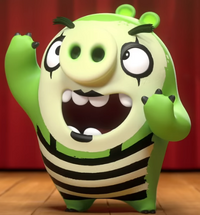 Mime Pig is a pig that appears in the Piggy Tales: Third Act episode The Mime and in Angry Birds Friends.

He is a movie pig with a painted white face with black eye circles that have small arrows on top and down them, white snout and lipstick and a painted white shirt with four black stripes and black suspenders.

They are normal pigs with white facepaint, black lipstick, black small arrows on the eyes and that wear white gloves or hats.

He is a mime and so is silent, the only thing he does to communicate is to make symbols and expressions. He can also create imaginary objects and use them like if them existed, which affects other pigs. He is very happy and loves doing what he does but doesn't like pigs who doesn't appreciate his art.

In the game, they appeared in the Love Is In The Air Tournament. They were just pig using white facepaint, gloves and hats that were the same as normal pigs. They usually would shake their gloves, giving a sense of motion.

Love is in the air Tournament level 3