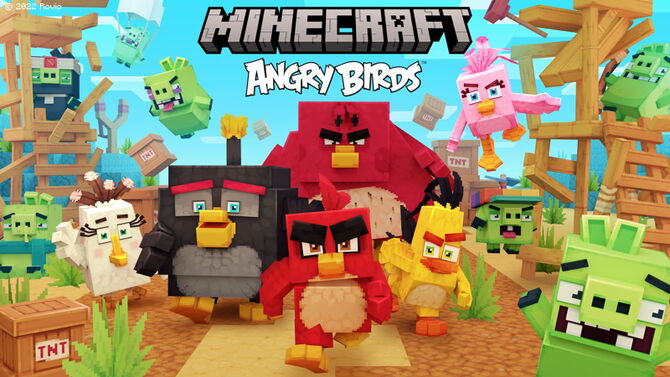 The Pigs are back to their old tricks, and it’s up to you to stop them! Play as Red, Chuck, Bomb and other members of The Flock, your mission is to rescue your friends, save the eggs, and stop the pesky Pigs’ grand plans. With each rescued bird, you’ll unlock a new playable character with unique skills to help you pop more Pigs and topple more towers!

Some time after the first movie, the Pigs sneak onto Bird Island and steal all of the Eggs, leaving Red to confront Leonard and retaliate against the pigs. Red frees other birds who join him on his mission, they rescue eggs and hatchlings before attacking Leonard in his castle.

In Minecraft Angry Birds, the player needs to explore an open-world to stop the pigs and save the other birds as Red at first with the player unlocking Chuck, Bomb, Stella, Matilda and Terence throughout the game. The player will unlock other worlds as they progress in the game. The main game supports multiplayer with up to four players being able to play at the same time. The player can also hatch hatchlings in the main game.

In the Classic Mode, it tries to emulate the gameplay of the earliest Angry Birds games. As with past Angry Birds games with similar gameplay, the main objective of the game is to pop all the pigs in the levels by launching a set of birds using a slingshot. These pigs are found inside of structures made of glass, wood and/or stone.

The DLC also comes with a skin pack based on Angry Birds: Summer Madness with it featuring Red, Chuck, Bomb, Stella, Neiderflyer, Robin, Mighty Eagle and Lynette to use in other parts in Minecraft.

As of May 17th, 2022, the game has a 4.7 out of 5 stars through the Minecraft Marketplace with 3 ratings. Fans on Twitter and YouTube call the DLC a "pleasant surprise" and comparing the two games as part of the viewer's childhood.[4]

For the gallery, see Minecraft DLC/Gallery.