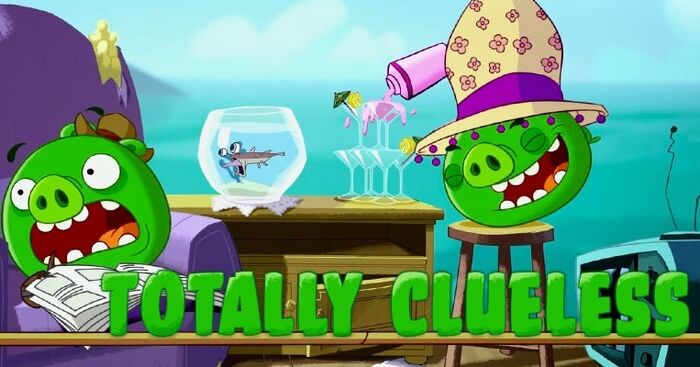 "So... Raw recruits, eh? Do you have what it takes to be minions? Do you have the primal need to defeat the Angry Birds? Do you have the heart of underling? The sheer determination of a subordinate? The burning desire to mindlessly follow orders no matter how insane they might be?"
— Corporal Pig, Angry Birds Comics #4

The Minion Pigs are characters that appear in the Angry Birds series. They are pigs and a part of the Piggy kingdom on Piggy Island, as well as a minion of Gale on Golden Island.

Stupid by nature, the Minion Pigs are in the lowest rank of the Piggy kingdom society.[2] However, they love having fun, and their stupidity makes them obedient soldiers that can be a great threat to their enemies.

Originally, the Minion Pigs were round-shaped pigs covered in lime-colored skin. They had small eyes and a medium-sized pig snout in between. On top of their head, they had two small ears. On their back, they also had a short, corkscrew-like tail. In Angry Birds Chrome, the Minion Pigs were slightly modified to be given a more cartoonish look and larger eyes.

In The Angry Birds Movie, the Minion Pigs' design was changed to give them an anthropomorphic body with cloven hooves at the end of their limbs. The head is now directly connected to the torso without a neck. Future releases would switch between this design and the old one.

The Minion Pigs are very stupid by nature, being unable to spell the alphabet, and ignoring warning signs.[6] No matter the situation, they will always try to find something to have fun with, such as the lights turning out[7] or them making funny sounds,[8] which more often than not leads them to get distracted. To compensate this however, they never give up, no matter how many times they have failed, and constantly try and try again until they manage to achieve their goals.[1] This makes them a great threat to their enemies, specially combined with the great numbers of them.[9]

While not having any superhuman abilities, the Minion Pigs can use their tails for a variety of things. They have been able to turn them into swords[10] and functional corkscrews[11] with no problem. In addition, they are experienced builders; once, a Minion Pig managed to build three entire houses on his own.[12]

The Minion Pigs are able to cheat death; when they are hurt enough, they will be sent to a white limbo, where they will be healed and then taken back to the normal world.[13] There are also Minion Pigs who managed to revive from the dead, such as the undead enemies and the Zombie Pigs.

The Minion Pigs are very weak to attacks and can be popped very easily.