She seems to be an angry mother because she grounded Bomb for exploding. 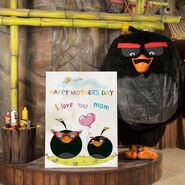