Template:Epic Infobox Level Moorlands - 1 is the first level of Moorlands in Angry Birds Epic. It is a normal stage. When this level is finished, the player may spin for 3 Stone.

The player has to engage 1 Frost Hog and 1 Brute. Each enemy's stats are shown below.

Choose Red in Samurai, Matilda in Druid and Bomb in Cannoneer (or if you have Berserk, use it!). Heal with Matilda if the birds' healths are not full and if they're full, attack with her. Then attack with the other birds. Use the Rage Chili for Bomb if there are 2 pigs or for Red if there are only a pig on the battlefield and for Matilda if a bird's health is under 80% when the Rage Chili is full! Also, use Red's secondary skill on one of the pigs' targets to attack which have the lowest current health. Remember to defeat the Frost Hog before you attack Brute! Repeat this over until you win or either lose.

Choose Red in Knight, Matilda in Princess and Jay, Jake, and Jim in Rogues. Heal with Matilda if the birds' healths are not full and if they're full, attack with her. Then attack with the other birds. Keep attacking with your birds or heal them at full health(It's okay if you tried healing) before the Frost Hog and Brute attacks your birds. If the Frost Hog and Brute are about to attack, use Matilda to attack the bird with the highest health or heal the bird who got attacked,  Also, use Red's secondary skill on the pigs' targets to attack the target. If you want to deal damage back, use Jay, Jake, and Jim's Cupcake trap on that same target and if the target is affected by Frost Hog's Shattering Blow, heal with Matilda to cleanse the target. Repeat this over until you win or either lose. 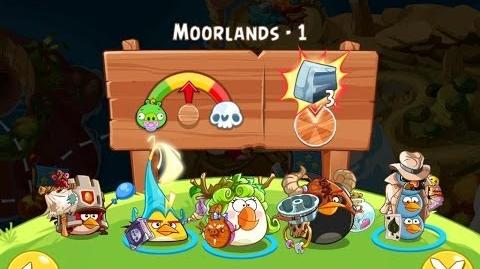 Retrieved from "https://angrybirds.fandom.com/wiki/Moorlands_-_1?oldid=213321"
Community content is available under CC-BY-SA unless otherwise noted.