Myles is an Angry Birds Evolution bird that can be obtained at any time in the hatchery.

He is a large blue fat bird with two large arms, a yellow beak with a moustache, a large blue hair that extends to a large also dark blue feather beard, large orange feet, a dark blue feather tail and two black bushy eyebrows. He wears black sunglasses, white cap with a black visor and the trucker symbol which is a blue classic Owl between dark blue spikes. He also wears a silver chain bracelet on his left arm.

His torso is lighter in the form of a shirt and has a tattoo of the trucker symbol also on his left arm.

He is now angry and wears a dirty and thorn white tank top with various holes, a silver chain and the hat has now two blue soda cans with straps, Myles is now drinking soda.

He was all the same except that he had a red rooster comb above his beak, his beak was frowning and he had less beard on the face.

He evolves the same as his current appearance but he has the rooster comb. 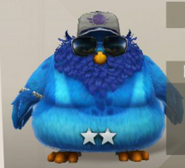 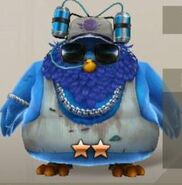 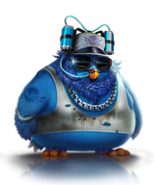 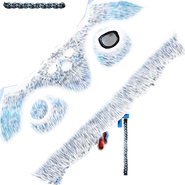