Mynock Pigs are extraterrestrial pigs that appear in Angry Birds Star Wars. They are introduced in Hoth and inhabit the inside of the Exogorth Pig. They first appear in the level Hoth 3-28 and are the final boss battle in level Hoth 3-40.

Not much is known about the nature and lifestyle of the Mynock pigs, nor why or how they inhabit the inside of the Exogorth. Mynocks are shown to be rather dull minded creatures, yet seem capable of building intricate structures.

Mynock Pigs carry a pale, green color and have two, wide wings which allow them to fly. They have a long tail which goes down their back. The Mynocks have anntenae-like eyes which stick out from their sides. Their bodies carry the shape of a normal pig. Their appearance carries the likeliness of a bat.

The Mynocks are first introduced when the Millenium Falcon flies into one of the craters of an asteroid outside of Hoth, unaware that it is the mouth of the Exogorth Pig. The flock attack and destroy the Mynocks and their structures in order to escape. In the final confrontation, the flock has to defend the Millenium Falcon from flying Mynocks as they attempt to make their way out of the beast and succeed.

The Fat Mynock Pig is a unique Mynock that is most notable for its immense size. It is a non-canon counterpart of the Fat Pig. It only appears in Hoth 3-40 as the final enemy of the boss battle. He is stronger than the others but can be defeated easily. 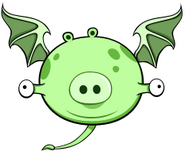 Retrieved from "https://angrybirds.fandom.com/wiki/Mynock_Pigs?oldid=263673"
Community content is available under CC-BY-SA unless otherwise noted.