Bonus Levels on the map; random

""Don't fear my skull hat; underneath my exterior is a gentle soul.""

He will start to sing in the levels, causing pigs to turn all the normal pigs into selected pigs and when the pigs are defeated, they will rise from the ground, as the Zombie Pigs, which give a new wave of pigs to the player defeat, defeating Necromancer Pig is a bit hard. 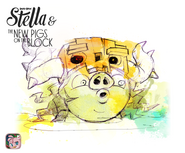