Nigel the Cockatoo, known simply as Nigel, is the main antagonist in Rio, Rio 2 and Angry Birds Rio. He is an evil Sulfur-Crested Cockatoo. He kidnaps the Angry Birds along with other rare species. He is battled in the last level of Jungle Escape as the first boss character in the entire Angry Birds series.

Just like in the movie Rio, he is a white Sulphur Crested Cockatoo with a bulky body, large feathery wings, a yellow and white mohican-like crest behind, feathery talons with black claws, gray curved beak with a nostril, small eyes and pink eyeabags. He is angry.

Just like in the second movie, Rio 2, his hair is longer and fancy, his beak is more black and he wears a yellow Shakespeare coat with green buttons, white end that has cuts and green borders and a white collar with green stripes.

He first appears in Jungle Escape 30 as a boss. In the level, he flies up, behind, down and flies to the front, flies a bit in a circle way, and returns to the proccess. If any bird hits something, he will start to laugh as they are injured. He is very strong but can be easily be injured by strong birds, explosions and hard objects. He can be injured three times and skin parts will appear on his body, when there's only three, he will be weak and fly faster and without a route. He will be defeated after he is injured a fourth time, where he will fly away with his feathers falling. If the player doesn't complete the level, he will laugh and the Level Failed screen will show him laughing.

He then reappears in Smugglers' Plane 6-30, where he does the same thing and has the same health. However, there are more objects to land on him.

He reappears in High Dive Level 20, where he is caged. His cage can be easily destroyed and he will laugh upon being freed, mocking the birds.

As a boss, he reappears in level Blossom River 20 where he is in a ship, is protected by doors and is with a switch. After the player defeats the guard marmosets, the door will open and any bird can push him to the switch, destroying the ship and defeating him.

He was a rockstar that was replaced by a parakeet and wanted revenge. He was being threated in the Environmental Conservation Center, but was jealous that Blu was being loved by Túlio. He watched the smugglers' den to check if every bird was caged, he then showed the price of Red, Chuck and The Blues and laughed of them. After the birds escape with Blu and Jewel, he demands the Marmosets to fight them.

In the jungle, he is defeated and flies away, making the birds commemorate. However, after Jewel flies without Blu for the first time, he captures her and Blu goes after him. Blu enters the smugglers' allegoric car and finds Jewel caged with other birds, however, Nigel captures him and they go to the smugglers' plane.

He fights the birds but ends up being defeated again. As the birds fly away, he is launched off the airplane and the airplane's planes pluck his body feathers, making him scream.

After losing his feathers, he had to wear a vest to hide that fact and he couldn't fly anymore. He was working as a Fortune Teller at a market, where he found Gabi, a poison dart frog, and Charlie, a mute anteater, that are not seen in the game.

He then appears caged in a harbor, which the birds free thinking it was another bird, but it's revealed that it was him and he laughs, mocking them. He then reappears in a ship, fighting the birds, but the ship is destroyed and he is defeated.

He is a cold bird that is hungry for revenge. He likes to laugh on other birds like if they were inferior and has no limits on what to do to take birds off his way. 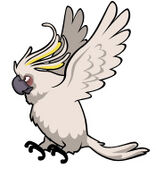 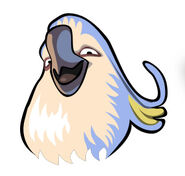 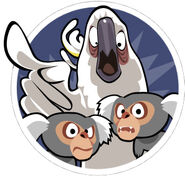 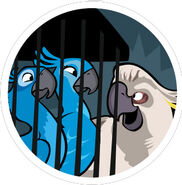 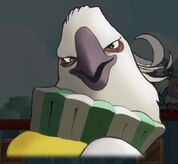 Nigel with a lock-in tow. 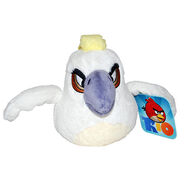