Pauline is a bird in Angry Birds Evolution that can be obtained regularly in the hatchery.

Pauline showed up for Angerbowl Sunday and somehow ended up in the middle of the field.

What happens next is history... but now every bird in town wants her on their team!

She is a chubby bird with a bow tie on her head tied to her hair. She also has dark red eyebrows, red-eye color, reddish-orange beak and feet, and a light yellow underbelly.

She now has a cheerleader's uniform that is mostly light green and white in the middle, sporting 2 stars and a star sticker on her cheek.

She had cut brown hair with ringlets that are tied with pinksih red bows each, a red beak with a large top part, a confused expression, large eyes with green irises, dark red eyebrows, a black mark below her left eye and a black feather tail.

She wears a tight dark blue Flocksburg Eagles tanktop uniform with a light middle and a skull on it and brown pants.

She wears the black Flocksburg Eagles quaterback uniform and helmet with yellow line, open her beak with broken teeth and a pink bowtie would appear on the helmet.

Dash through enemies, dealing 97 damage and spawning a power-up the chance of 30%

Dash through enemies, dealing 125 damage and spawning a power-up the chance of 30%

Attract cheerleaders to the battle to support the team. Additionally, spectators are more likely to drop Power Ups the more set birds are present.

When she is in her first level, it is less than 200, but she can be evolved to surpass this number.

When she is in her first level, it is less than 90, but she can be evolved to surpass this number.

When is in her first level, she gives less than 540 Bird Power to the team, but she can be evolved and trained to give more. 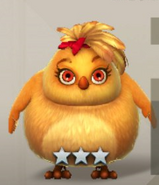 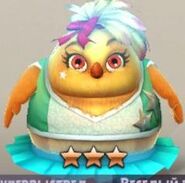 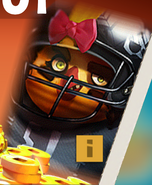