Pig Bang is the first episode in Angry Birds Space and consists of 34 levels.

STAR CLAWS
Armed with their new cosmic powers, the Space Flock stood ready and waiting to fling themselves into action. They didn't have to wait long. Pink wormholes began swirling into existence all over the galaxy and before you could say 'ca-caw' the entire solar system was teaming with ships. Convinced they were safe from attack, the hogs started snatching eggsteroids with their cybernetic pinchers. Big mistake. Suddenly, warning klaxons sounded all across the piggy fleet. Were those comets streaking towards them? No, they were birds - and Angry Birds, at that.

The Birds witness the Pigs emerging from a vortex. The King Pig, in his mobile, steals an Eggsteroid using a claw. The Birds get angry and chase after them.

The King Pig is defeated by the Birds, but he emerges from the wreckage of his vehicle and escapes, so the Birds, chase after the Space King's escape UFO.

Pig Bang contains 30 levels and 4 bonus levels. Most levels are very easy but some can be tricky for some new player. Level 1-28 is the trickiest.

The boss of this episode is the King Pig, in the battle, King Pig will control a large machine that produces vegetables and asteroids, in order to defeat the King, the birds must hit the asteroids so they hit King Pig's machine and damage it, another way is to use Black Bird on the machine and have him explode. When King Pig is defeated, the machine will break and King Pig will escape in a UFO to Cold Cuts. 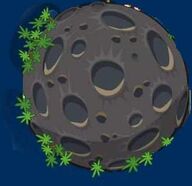