The Pig Palace is one of the largest structures in Pig City. It was first constructed for King Pig's ancestors before being passed down through multiple lines of monarchs, eventually to be inherited by King Mudbeard. Standing many stories high, the castle was known to have a variety of amenities and a network of hallways, including a spacious cellar which housed the Pigs' munitions supply. This proved to be the castle's fatal structural weakness, as the improperly stored munitions would explode with more than sufficient force to undermine the castle's structural integrity if they were to be ignited.

The castle first appeared in the original Angry Birds game, as a structure of stone with also various blocks.

The castle was constructed long before the pigs first arrived at Bird Island. The castle was passed from monarch to monarch before being inherited by King Mudbeard. Shortly after he captured the birds' eggs, the Battle of Pig City began, eventually destroying the original palace alongside multiple structures in Pig City. A hunt for Red launched in the castle, when the Mighty Eagle crashed into the castle and retrieved the eggs as Red yelled his battle call. The castle and the surrounding structures were destroyed by a myriad of dynamite and TNT under it. The castle blew up, but King Mudbeard survived, though heavily injured, along with his assistant, Ross. The castle was then rebuilt in a different style (this time with a face in it), with a grander, more triumphant facade, which had to be ascended by using a flight of stairs.

The palace has a vast array of rooms, including a great hall in a high portion of the castle, a bowling alley somewhere in the middle, a cavernous munitions cellar located underground, and a kitchen with a large boiling pot. Portraits and posters for plays could be found inside a number of rooms.

In the reconstructed castle, there was a large throne room, a long porktrait hallway, a kitchen, bathrooms, bedrooms, and various other rooms.

The castle was meant for King Pig and his servants.

A cabbage aimed at Pig Palace

Concept art for Pig Palace in The Angry Birds Movie 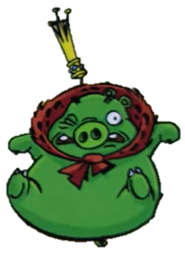 THE PIG PALACE on day

Leonard's castle
Add a photo to this gallery
Retrieved from "https://angrybirds.fandom.com/wiki/Pig_Palace?oldid=267614"
Community content is available under CC-BY-SA unless otherwise noted.