Template:Epic Infobox Level Pig Prison is the first level of Cobalt Plateaus in Angry Birds Epic. It is a wave stage. When this level is finished, the player may spin for 3 Stone. The Pig Guard and Guard Captain are introduced here.

Pig Guards attack every turn and will drain part of the birds' Rage Chili while the Guard Captain is the first pig with the Ironclad ability, which makes him take only half the damage if it is less than a certain value.

The Guard Captain's specialty is to give all allies a shield that will reduce the amount of damage received.

This level is a tutorial for wave battles, which teaches you how to win wave battles without losing much HP from your birds.

This is also the only level in the game which contains Imprisoned Chuck, who will defeat all the other pigs if its HP reaches 0.

Clearing this stage will allow you to use Chuck.

Note: This cutscene occurs after reducing Imprisoned Chuck's health to 0.

Chuck was freed. To make sure the pigs regretted kidnapping him, he unleashed a powerful attack that killed the pigs.

Note: This cutscene occurs after clearing this stage.

Chuck has been freed by Red. Prince Porky was enraged but continued standing where he was.

The player has to engage 2 Pig Guards, 1 Guard Captain and 1 Imprisoned Chuck.

Added pigs that can appear in this stage:

Here are each pig's stats:

Note: Will not appear all the time. Can appear as part of a wave.

Here are each of the wave's combinations.

The Bird Catcher was added as an additional enemy. Also, the pigs' stats have been buffed.

Here are each pig's stats:

Here are each of the wave's combinations.

Just attack every turn for wave 1 and 2. In wave 3, attack just Chuck's cage to win (since destroying Chuck's cage will result in Chuck instantly killing the other pigs).

You need to be careful when you fight this stage. it is suggested that you focus on the pig with the lowest health so as to reduce the amount of damage taken. It is advised to have Matilda or be at a higher level before re-attempting this stage.

Wave 3 (pre-Chuck)
Add a photo to this gallery 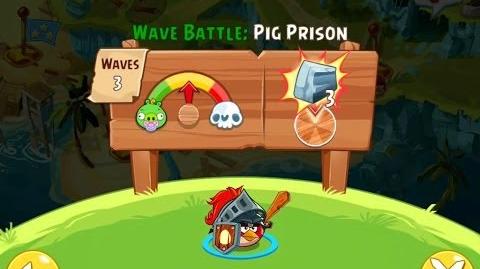 Retrieved from "https://angrybirds.fandom.com/wiki/Pig_Prison?oldid=260678"
Community content is available under CC-BY-SA unless otherwise noted.