The Pig To School Tournament is an Angry Birds Friends Tournament that happened on:

It's a tournament entirely meant to celebrate the Back To School, where school time starts after a summer recess. This tournament features various new content, such as D Paper Cones and many others. Most of the items return from previous tournaments, such as The Up For School Tournament.

It's time to get Pig to Shcool! Get your apples ready and prepare for math lessons!

The tournament takes place on a courtyard of a school, where the wooden gate is visible and the door of the area has a SHCOOL written on top of it as a sign. In the far background, there is Pig City, with a bunch of houses.

In the foreground, there is a grass path.

It features several new things, such as: 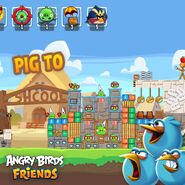 Add a photo to this gallery
Retrieved from "https://angrybirds.fandom.com/wiki/Pig_To_School_Tournament?oldid=246174"
Community content is available under CC-BY-SA unless otherwise noted.