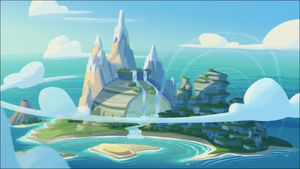 Slingshot Woods was seen in several games but was first officially coined the name in Angry Birds Epic. It goes in several directions. The World of Angry Birds Official Guidebook tells that only Y-shaped trees grow there. The trees remind the pigs of the birds' slingshot, so they usually stay away from there. This location is featured in:

South Beach is located opposite of Slingshot Woods. Located after South Beach is the Cobalt Plateaus. Due to the striking resemblance, this must be where the Vuela Tazos Angry Birds advertisement had taken place. This is the new nesting place of The Flock. This location is featured in:

Desert Island is a location on Piggy Island that was seen in general but was classified first in Angry Birds Epic. Desert Island is sandy and has cacti growing as vegetation. This location is featured in:

The golden fields appear to be south to the Great Cliffs and east to the limestone lagoon. The location has golden-colored plants growing in them, giving the name its place. This location is featured in:

Square forest is the other forest. It is located at the opposite of Bamboo Forest. This forest is located between Giant Red Valley and the Eastern Sea. This location is featured in:

Piglantis is a location near Piggy Island that is also another island. Piglantis is where the Octopus Pig lives and is also where the Angry Birds Seasons episode Piglantis takes place. To access Piglantis, one needs to travel from the Pig City Harbor. This location is featured in:

The Moorlands are at the top-right corner of Piggy Island. it is a mystery as to what occurs there. So far, this location has only appeared in Angry Birds Epic. This location is featured in:

The Cobalt Plateaus is a reoccurring location on Piggy Island. This are called Cobalt Plateau because it's rich of Cobalt Stones. It first appeared in Angry Birds Toons, being the location of several episodes such as Fired Up!. This is one of the places Red wishes to raise the eggs from the pigs. It appears in Angry Birds Epic with 27 levels in total. This is where Matilda has a garden called White's Garden.  This location is featured in:

Bomb tries to control his temper by soaking in the hot springs on Hog Head Mountain.

Inside this mountain, there is a volcanous place full of boiling lava and structures made by ancient civilizations such as Pig-shaped stone cannons activated by ores, as seen on Angry Birds 2.

The Crown Mountains got its name due to being shaped like a crown for the pig-shaped Hog Head Mountain when viewed from afar. In Angry Birds Epic, this location is split into several smaller locations: Canyon Land, Snowy Peak, Winter Wonderland, and Island in the Sky. Due to its high altitude, the summit is permanently covered in snow. This is where the Sub Zero levels of Angry Birds Go! also occurs. This location is featured in:

This cave has a lot of Brutes and monster-sized pigs in Angry Birds Epic. This is probably where Mine and Dine was set. This location is featured in:

This cave is where Chronicler Pig carves hundreds of dioramas and statues out of the natural green wax that oozes from the rocks inside the cave, according to The World of Angry Birds Official Guide. In Angry Birds Epic, there are lots of levels and all kinds of pigs are here. It is located inside Hog Head Mountain. This location is featured in:

This placed was named Star Reef not just because the area is shaped like a star, but also because sea-stars can also be harvested in the area This location is featured in:

The Great Cliffs are where Poached Eggs and Mighty Hoax takes place. It was the original nesting place before the Old Nesting Barrows and Cobalt Plateaus. This location is featured in:

The palace is one of the most important buildings in the country and the residence of the island's ruler. The original castle was destroyed along with multiple other structures in a massive TNT explosion in the Battle of Pig City. It was later rebuilt at an unknown point in the timeline. It is located in the nation's capital, Pig City. This location is featured in: 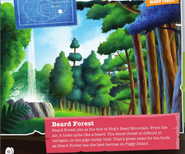 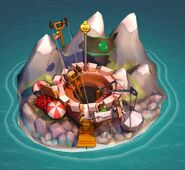 In The Angry Birds Movie.

The planet where Piggy Island is presumably located (at the top)

Retrieved from "https://angrybirds.fandom.com/wiki/Piggy_Island?oldid=276117"
Community content is available under CC-BY-SA unless otherwise noted.