Piggy McCool, also known as Merchant Pig, is a Minion Pig disguised as a Blue Bird that first appeared in the Angry Birds Toons episode True Blue?. In the episode, he was set up by Chef Pig to distract The Blues and steal the eggs. He reappears as a supporting character in Angry Birds Epic and in Angry Birds POP!.

Angry Birds Toons marks the debut appearance of Piggy McCool, then generically called a Minion Pig. He only appears in True Blue?, where Chef Pig sends him out to distract the Blues long enough to steal the eggs. The Blues' games repeatedly get Piggy McCool injured, and once he tries to take the eggs, the Blues launch him out of a slingshot after showing they knew he was a pig all along.

In Angry Birds Epic, Piggy McCool appears as a supporting character. He appears in the Camp, and has a shop where players can buy resources and other things. He is always part of the player's friendlist, and it's possible to have freerolls in his Golden Pig Machine. In the Tutorial Match in the Bird Arena, the player would battle Piggy McCool's team (Red as Knight, Chuck as Mage and Matilda as Cleric). It was also possible to perform freerolls in his Bird Arena Golden Pig Machine.

It's possible to hire Piggy McCool, called Merchant Pig in-battle, for free in Daily Dungeons and the Chronicle Cave. Players can only hire him for free once per 12 hours, paying Lucky Coins for additional consecutive uses. However, if they had used Piggy McCool in a dungeon, they cannot use him in the Cave, or vice versa. Once a day, if a player has beaten a Daily Dungeon with him, they can watch a video to get one free friend unlock on any Friendship Gate.

In Angry Birds POP!, Piggy McCool appears as a guest character for a short period of time, where he is playable and assists the player in any task. His Pop is the Plunder Pop, where he can shoot a bubble that destroys some bubbles and gives the player 3 bubbles.

In Angry Birds Evolution, Piggy McCool appears as a CPU, in which the player has to defeat his birds in a battle. He doesn't appear physically, not even in icons. Dr. Strangebird and Piggy Nian are based off him and are basically the equivalent to Piggy McCool in gameplay. 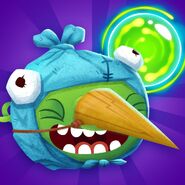 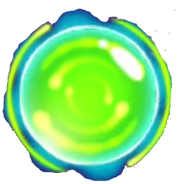