Not to be confused with Pig Tales 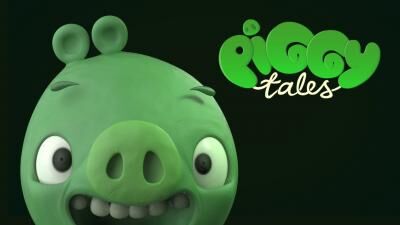 Piggy Tales is a CGI-animated series animated to look like claymation premiering on Toons.TV starring the The Flock's enemies, the Bad Piggies and focused to the adventures of curious little Minion Pigs. New episodes came out every Friday on Toons.TV and a week after every Thursday on YouTube.

The series was continued in Piggy Tales: Pigs at Work, a second season which focuses on the Pigs working with some funny hijinks in the way. It was also the final season released before the release of The Angry Birds Movie.

It was later continued again in Piggy Tales: Third Act, a third season which has the Pigs now doing activities on a stage. In addition, the series has been changed to fit the style of The Angry Birds Movie following it's release a year since.

It continued once again in Piggy Tales: 4th Street, the fourth and final season which has the Pigs in their new home of Pig City in a funny chaotic new world. The movie style is still kept in this series.

Rovio proudly presents a new animation series premiering on Toons.TV today! Piggy Tales gives you a glimpse into the lives of our favorite green minions in a way you've never seen them before. In the first episode, a curious Piggy comes across a trampoline and can't resist jumping on it – even though he's not supposed to…

The Title Cards varry according to the theme of the season:

The title card is a highlighted important part of the episode in a dark green background.

The title card is an artwork of what happens in the episode but not a particular scene, similar to Angry Birds Toons.

The title card is based on Theatre posters, with a main element in it but often not a particular scene.

The title card is an artwork of a scene of the episode made in a different way, in a similar way to a Billpost.