Pigini Beach is an episode of Angry Birds Friends released on July 10, 2012. It is another beach-themed episode like Surf and Turf and has 15 levels and the final episode of the Story Mode.

The level takes place in the same beach as Surf and Turf but at afternoon, and instead of having 45 levels like the previous, it has only 15.

The episode features the birds from previous episodes and Mighty Eagle, but it features some few new additions, which are the yellow floaters, that work the same way as rubber.

In the final level, 15, King Pig appears as a boss, and the final boss of the entire game, with his throne and everything, but a tiki statue blocks him, so heavy birds must destroy it to defeat him. 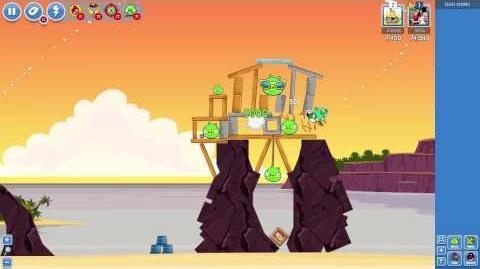