Pigtoking is a pig that appears in the Double Trouble Tournament in Angry Birds Friends as a boss.

Pigtoking is based on Slimer from Ghostbusters. On his glowing body, he has a light green complexion, a round body with two ears, and a lime green snout. He has 6 spots on his body and a large tail at the end of his body. In his mouth, he has a big tongue, 3 teeth, and near the snout, there are two big yellow eyes with red pupils in different positions surrounded by dark green spots. He also has a big chin below the mouth due to the fat.

In his defeated reborn version, Pigtoking is larger. He now has an injury mark on his body, and his snout and eyespots are purple.

Pigtoking is made of slime and is some type of ghost pig. There's some things that can prove that he is based on Slimer:

In the Double Trouble Event in Angry Birds Friends, the players could feed two monster pigs with Hostess Cupcakes: Pigtoking or T-Bone. Most of the players voted for Pigtoking in a fierce battle and the pig won.

The player could feed him with cupcakes collected from the levels in the Double Trouble Tournament.

As he was the winner of the Feeding Event, he appeared in the levels from Halloween Mania. When he is in his normal form, he doesn't move. But when the player defeats him, he is reborn from a heart, gets bigger, and destroys blocks, items, and pigs. He is very strong and hard to defeat.

Pigtoking appears to be summoned by thunders, as seen in the Angry Birds Friends Double Trouble Tournament Trailer.

Pigtoking's enemies are the birds (who also helped him to get bigger to give them some pumpkins), T-Bone, and the Minion Pigs (probably). 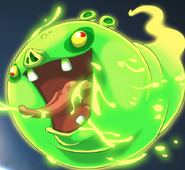 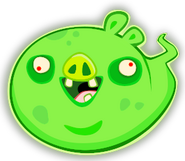