The Pilot Pig is a character who first appeared in Angry Birds.

The Pilot Pig has a similar appearance to a Minion Pig but instead wears pilot headgear, including goggles.

In the game, they first appear in the Bad Piggies episode. They are only pigs wearing pilot headwear and have nothing different from other pigs. The headwear is almost indestructible and not solid, as birds can get through it.

In the game, they appear in the same way as in the first game, but in various instances.

In the game, they appear as enemies first introduced in the Golden Fields zone. Their stats are shown below:

In the game, they appear as the Helipig, a pig that flies and is weak.

In the game, they appear in the Piggy In The Middle levels, as the main enemy the player has to drop. If the player pops bubbles, they will rotate, making Pilot Pig dizzy or scared. When the player drops him, the level is completed.

In Angry Birds Action!, they may briefly appear after a player takes a turn, dropping blocks or TNT crates, but they are untargetable, on the Bird Island portion they dress themselves as birds and their planes are made of natural resources such as bamboo and leaves.

The pilot pigs could be replaced by Mighty Eagle if the player opened the game with the microphone enabled on the digital version of the Movie, Mighty Eagle would drop goodies crates instead of TNT crates.

Pilot pigs appeared in The Angry Birds Movie as members of the Piggy Air Force. They are trained to pilot makeshift aircraft. A squadron of Pilot Pigs was deployed, under orders from King Mudbeard during the Battle of Pig City to attack and intimidate any birds who got into Pig City, but the pilots exhibited bad marksmanship and were unable to inflict any direct hits on their targets. After Mighty Eagle intervened later in the battle, Bomb assaulted the squadron and eventually crippled it by using his explosive abilities to disable the squadron's reinforcements.

The pigs' airplanes are weirdly made, as some engines fall off it, but when this happens, the pigs have an emergency system where pedals are activated. 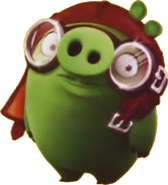 In the Angry Birds Movie

Foreman Pig as a Pilot Pig.