Template:Epic Infobox Level Pirate Coast - 3 is the third level of Pirate Coast. This level presents to you the wild pigmies, who can gain bonus attack power while the Rage Chili fills up. First of all, you will meet Tiny Pigmies and Pigmy Shooters. Tiny Pigmies are the weakest of the Pigmies, while Pigmy Shooters prevent you from using your Rage Chili. And what's worse is that they can call for other Pigmies to help.

Wiz Pig goes to the Banjo Bayou and laughs (evilly) at the Birds. Red was angry at him and he starts running after him. Wiz Pig makes a Blue Pig Gate (which can only opened by Blue Keys, the keys that Wiz Pig is protecting) when he almost reached him. Then, Wiz Pig put a zombie named Stinky Stanley right on the Slingshot Woods to defeat the Birds.

You have to engage 3 Tiny Pigmies and 1 Pigmy Shooter. Each enemy's stats are shown below.

Choose Red in Samurai, Matilda in Druid and Bomb in Pirate. Attack with the birds every turn (Tiny Pigmies first and then the Pigmy Shooters). If the bird's health is not full, then you must use Matilda's secondary skill to heal all the birds at once. Give the Rage Chili to Matilda when it is full. Repeat this over until you win or lose.

These pigs are Wildlings who gain 1% power per 2% filled Rage Chili, on average. The Pigmy Shooters can disable the Rage Ability of the target bird, so focus on them first. Not to mention, they can call more Pigmy Shooters to support them. 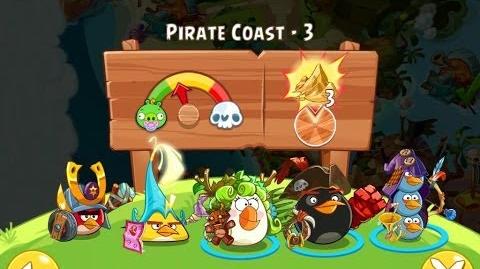 Retrieved from "https://angrybirds.fandom.com/wiki/Pirate_Coast_-_3?oldid=220074"
Community content is available under CC-BY-SA unless otherwise noted.