The Player Vs. Player Arena is an arena in Angry Birds Epic that was introduced in the 1.2.1 update of the game. The player can fight other players to advance leagues and win prizes.

Ranked arena battles are the main battles against other players' bird teams. Unlike regular battles, the goal is to take down the opponent's banner, and any bird that is knocked out will rejoin the battle after three turns. The possible prizes on the wheel are 10, 15, 25, or 50 arena points, and 15 snoutlings. (points are increased with higher leagues) There is a penalty for losing battles: lose three times and you cannot play any more battles until the next day or you pay 20 lucky coins.

Before update ???, there was also battle modes called "Unranked Arena Battles", which could be accessed from the can be accessed on the friends' section of the totem, which was removed from update ??? as well. It was possible to fight either the default friend Piggy McCool, whose team was always Paladin, Wizard, and Bard, or Facebook friends' teams, which was the last three birds they have selected recently. In "Unranked Arena Battles", there was no prize or penalty for competing in this mode, though it could be used to swap opponents in the "Ranked Arena Battles" in case the current opponent was deemed too strong or when a certain bird was needed to complete a daily objective by entering and quickly leaving the battle.

The main method to accumulate arena points is by completing up to three daily objectives per day. The objectives are reset at a globally set time. (originally at midnight local time)

Here is a list of the possible daily objectives that can appear:

The banner cannot attack but it can give passive supportive abilities for your birds. The three parts of a banner are the top, the flag, and the emblem. Different emblems have unique abilities that the banner can gain benefits from birds or harm and hinder opponents. Banner parts can be obtained from winning leagues and the arena golden pig machine.

At the end of the season, every player of the arena will receive a trophy and a profile picture frame of the highest league they have reached though it may also be due to heroic arena deeds.

The table below shows the reward at the end of each week of the season.

Ranking first at the end of the week 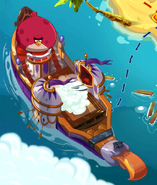 The Wood Trophy, awarded for reaching the Wood League in a season

The Stone Trophy, awarded for reaching the Stone League in a season

The Silver Trophy, awarded for reaching the Silver League in a season

The Diamond Trophy, awarded for reaching the Diamond League in a season
Add a photo to this gallery

If you hack your amount of lucky coins, snoutlings, or friendship essence, or if your arena scores indicate you're not playing fairly, there's a chance you will get a cheater tag on the league leaderboard. You're at the bottom of the leaderboard with a cheater tag and if you're above wood league, it will automatically demote you down a league.

These essentially acts as the banner's equipment although it only adjusts health.

Note: All Mythic emblems have the Mythic Protection bonus on top of a better ability.

Retrieved from "https://angrybirds.fandom.com/wiki/Player_Vs._Player_Arena?oldid=220919"
Community content is available under CC-BY-SA unless otherwise noted.