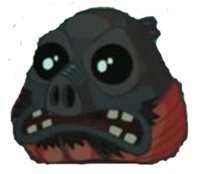 Ponda Baba (born 29 BBY on Ando), as well as his friend Dr. Evazan, both originally appeared in Star Wars Episode IV: A New Hope. In the Cinematic Trailer, Ponda and Evazan appear as pigs and don't seem to like Red, (most likely because Red accidentally shoved Ponda into a pickle jar, causing a pickle to be in Ponda's mouth) in the original movie, Ponda's arm is chopped off by Obi-Wan. In the trailer, the only thing that received damage from Obi-Wan's Lightsaber was the pickle in Ponda's mouth, possibly censorship, or the fact that they have no arms or both. He appeared in a toy set along with Greedo. 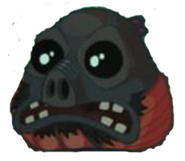