''What? I refuse to use them for your evil plans! Look at those sensitive little creatures, they are harmless!''

«The Professor Pig is an inventor. Inventive and imaginative, he has an infectious excitement about new things. This excitement lets him accomplish great projects if he really puts his heart in them. The details sometimes escape him, and he's not very accepting of piggies who don't share his vision. But he'll let other pigs sort out the details while he focuses on the big picture».

— Modified from the Birdsonality Test.

He is a happy smart scientist that makes peaceful inventions and teaches the pigs about the birds and other things as he is a professor.

Just like Matilda, Professor Pig hates war a lot, as his blood boils every time Foreman Pig steals his blueprint of peaceful inventions as a design to build an egg-napping contraption.

He is a green large pig with a lighter color snout, two white eyebrows, three spots on his head and his forehead is large because of the brain. He wears an orange bowtie and glasses

He is like his normal appearance, but he lacks the bowtie, the spots are in the hear and his complexion is darker.

His head is like his normal appearances, but has hair, wears a red bowtie and is fat. He sometimes wear a white scientist suit. 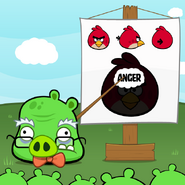 Professor Pig teaching other piggies about the birds.

Professor Pig as he appears in Angry Birds Toons. 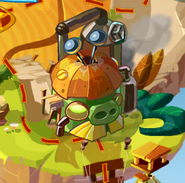 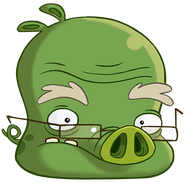 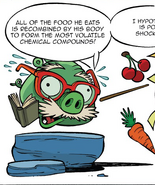 Professor Pig, as he appears at some comics. 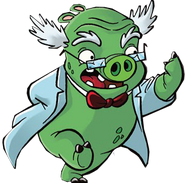 In The Movie's Comics. 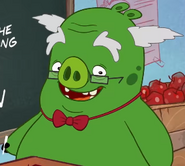 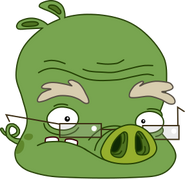 Vector image made by Cleopatry221987

Retrieved from "https://angrybirds.fandom.com/wiki/Professor_Pig?oldid=271818"
Community content is available under CC-BY-SA unless otherwise noted.