Quentin, Harbinger Of Doom, is an Angry Birds Evolution bird that could be obtained in the hatchery in the Easter Hunt Event and following events.

He was sent from the future to terminate the pig’s very own evil creation, Fringy before it ravages Bacon Town. Equipped with a hard shell and a slightly grumpy, yet deadly glare, he enters the fray.

He is a red pear-shaped bird with a long flat orangeish yellow beak with a sharp tip that is frowning with a large set of teeth, feet of the same color as the beak, large wings, large eyes with brown irises that are almost closed with red eyelids and bushy black eyebrows that are angry . Quentin has a cracked egg shell on the top and bottom, which are striped in a pink and orange pattern. On the top shell, there's three feathers of dark brown hair that pulls to behind sticking out of the head and more feathers below it and a dark brown feather tail sticks out of the bottom egg shell.

His hair now consists of more than seven feathers that are shaped like leaves, he is now laughing and his eyes are challenging and the colors of the shell change to be more yellowish and has a triangle pattern. He now wears a red headband with white spots that say HERO on the top eggshell and is tied like a ribbon.

Flyers On The Storm Evolution

Based on a Shifu, Quentin has now a white long separate mustache on the beak and a long goatee below the beak  and his eyebrows are also white. He now wears a wine-red kimono with orange sleeves and collar. The top eggshell is now a rice hat where white hair bun tied with a wooden spoon sticks out of. The bottom eggshell is now a broken saucepan with a notepaper that has a a drawing of a bunny with the name Miffy on it

Eye Of The Storm Evolution

Based on an Evil Scientist, Quentin has now a black mustache and goatee and the hair is bushier to the back. He now wears round black steampunk goggles with red lens, a white sweater, and black gloves. The top shell is now a rusty metal helmet with a light border that is screwed and a light silver antenna that is wore with a blue top and has red cords sticking to the bottom egg shell that is now a robot virus with red angry eyes, teeth and four legs and a turbine where the tail sticks out of it.

Throws a projectile at a pig that deals 400 damage and bounces it in a direction. On his path, it ignites a firestorm that calls the spirits of Easter and damages all pigs within.

Throws a projectile at a pig that deals 1000 damage and bounces it in a direction. On his path, it ignites a firestorm that calls the spirits of Easter and damages all pigs within.

Flyers On The Storm

Throws a projectile at a pig that deals 3900 damage and bounces it in a direction. On his path, it ignites a bigger firestorm that swallows the battlefield and damages all pigs within.

Eyes Of The Storm

Throws a projectile at a pig that marks the pig for the wrath of the Easter gods to deal 2600 damage and bounces it ina direction. The storm it ignites devastates all unfortunate pigs within.

Boosts the damage of Working Class Heroes Villians Birds by 20%

The income of Red Evolution Material and Coins when selling him varies according to his level.

Flyers On The Storm Icon.

Eye of the Storm Icon.

Flyers Of The Storm Evolution. 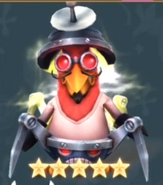 Eye of the Storm Evolution. 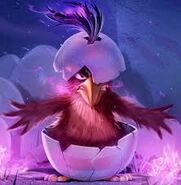 3D Model made by Bastian Brem.